Growing up as a fundamentalist Christian in New York’s Catskill Mountains, I longed to be a missionary. In school, I did not want to spend time cooking and sewing, since Jesus said “take no thought for” those things. Could I learn metal and woodworking instead? The shop teacher refused: “It’s too dangerous for girls.”

Phil West, a family friend, was studying for the ministry. I fell in love with the way he made sense of the world. We married in 1965.

When I got depressed, we blamed birth control pills. Our first baby was a boy. Phil got a vasectomy. We adopted our next transracially. Friends asked why I requested a boy.

Their question haunted me. Women seemed frivolous, self-absorbed, ineffectual. Phil urged me to join the women’s movement. He pointed out how my anger and self-loathing resembled some black teenagers we knew. Similarities between racism and sexism prompted me to attend a New York City NOW demonstration in 1970. That very day, NOW leaders asked me to write a letter to the mayor protesting sex discrimination in public schools.

I felt giddy with excitement. Before long, Congresswoman Bella Abzug read our letter and report into The Congressional Record to help win Title IX and outlaw sex bias in schools.

Feminism stirred me at new depths. Women called each other sisters – like in my childhood church. I returned to modest clothes and shunned makeup. Instead of praying away confused feelings in tongues, I struggled to talk about them in English. We purged sexist words from our language. We distributed feminist articles as if they were religious tracts.

Encouraged by United Methodist activists, I went to seminary, got ordained, and served a church in rural Connecticut, where our family had moved. Phil and I demonstrated against apartheid in South Africa and helped deliver medicines to refugees in Mozambique and Namibia.

Meanwhile, pastoral counseling made me increasingly aware of families tormented by domestic violence and sexual abuse. In 1988, I became executive director of the Women’s Center of Rhode Island, and we moved to Providence. Battered women showed me how Family Court and the Department of Children, Youth and Families made life intolerable for their children. I wrote newspaper columns and blogs about lawyers and agencies that abused their power. It became my mission.

Phil and I faced one more dynamic shift in 2009.We had both retired from active ministry when we discovered our beliefs had shifted. We had become secular.

My personal arc resembles the evolution of the YWCA and YMCA. Both started as Christian faith communities in the mid-19th Century. In response to human needs, they grew increasingly secular. Today YMCA banners lift up core values of CARING, HONESTY, RESPECT, and RESPONSIBILITY. The YWCA motto affirms, “Eliminating racism, empowering women.” These remain central to my own mission. My Facebook page is “FaithfullySecular.” 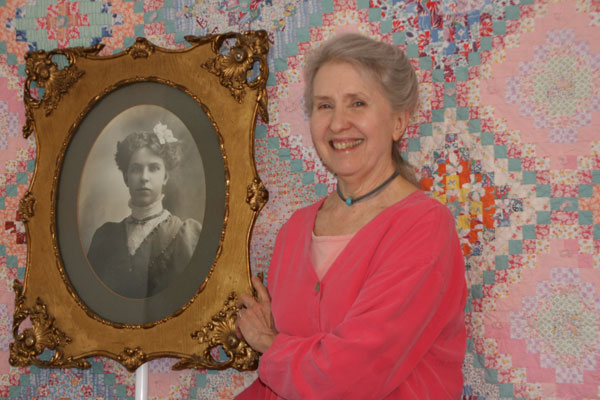 Anne Grant arrived in Rhode Island in 1988 when she was 41 to work with battered and homeless women and their children as executive director of the Women’s Center of Rhode Island. She began focusing on women’s issues in her twenties when she edited New York City NOW’s “Report on Sex Bias in the Public Schools” that helped win passage of Title IX. Her productions on women’s history and coeducational sports brought her two Emmy Awards. She has served as a United Methodist Pastor at Trinity and Canaan Churches. Grant’s public service is extensive and includes coordinator for Parenting Project, vice chair CommunityWorksRI, president Elmwood Foundation, and executive director of Women’s Center RI.

Editor’s Note: Anne Grant is shown with a portrait of her grandmother, Maud Case Denton.